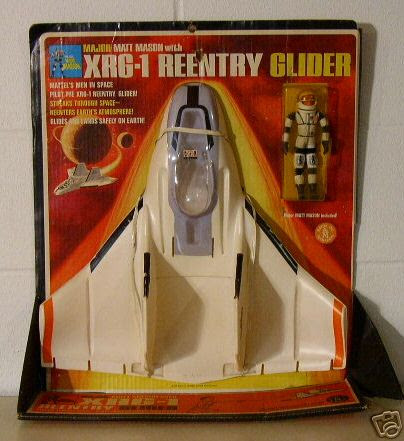 Major Matt Mason XRG-1 Reentry Glider with figure
Rare and possible only example of Matt Mason Glider
eBay Auction #250186303993
Ending Bid: $4,350.00
End Date: Nov-17-07 20:00:00 PST
Description:
Hello. Offered here is the super rare version of Mattel's Major Matt Mason with XRG-1 Reentry glider. I have collected Matt Mason toys for almost 25 years now and I don't know anybody else who has one of these or anyone who knows anybody who has one of these. I have owned it for over twenty years and it was bought for me by a friend at a local drive-in flea market. It has been pictured in Tomarts Action Figure Digest and Tomarts Action Figure Encyclpedia volume two with alot of my other Matt Mason Toys. It's condition hasn't really changed over the years, but it has a few things that I need to point out. The plastic bubble around the Matt Mason figure is cracked and has a piece missing. It is possable to remove the figure, which I did once, from the package. The one time I did this, I found the figure to be like new and in stiff, unused condition. I very carefully put him back and never took him out again. I feel confident that it is the same figure that has always been in there based on it's condition. The card has a hole punched in it about two inches below it's original hanger hole (which is torn) and the bottom right hand corner is also split, all of which I have tried to show in the pictures Other than that, it is a bright, colorful package that has much more of the look of a true reentry than the other version. The glider itself is great condition with no breaks or splits as I do not think it has ever been flown. I truly believe that this may be the only example of this toy known to exist (if you have one, let me know) and I offer it here at no reserve. I accept Paypal or Money Orders only (NO CHECKS!!!). Shipping is $15.00 and is done via USPS Priority Mail and includes insurance and delivery confirmation at no extra charge. I only sell to the USA so no foreign bids will be accepted. Please feel free to e-mail me with any questions ( but not "will I end my auction early") and I will contact the winner after the auction ends to work out any details. Thanks in advance and happy bidding!!! 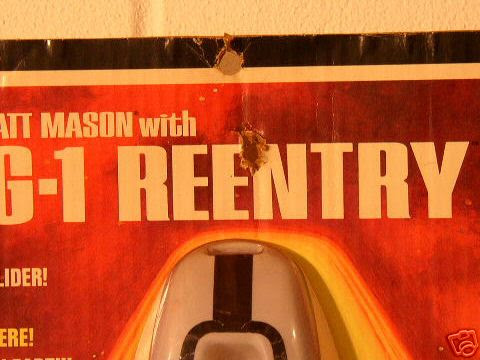 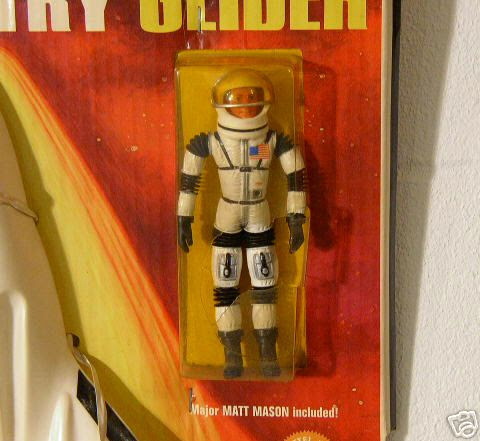 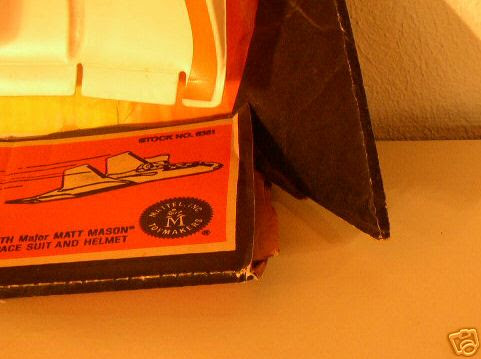 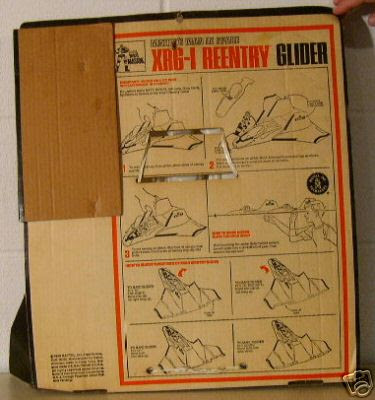 My Take:
This is hands-down one of the rarest production pieces. I know of only a handful with missing figures and one very fine, complete example (in Alec Peter's collection originally from Greg Recaro). Recently the only Canadian example surfaced (see previous post). I think this one could have gone over $5K given the right bidders. This one actually has some historical significance as it's the same as provided in Tomart's guides for toys.
mattels man in space major matt mason with moon suit 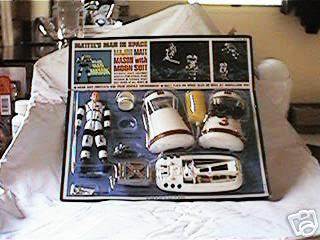 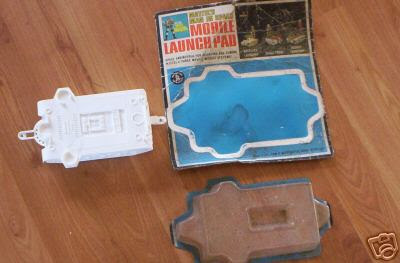 Not much new or exciting, though I thought I would mention this:
Major Matt Mason Mobile Launch Pad Mattel 1968 NEW
eBay Auction #330184814712
Ending Bid: $171.38
End Date: Nov-11-07 13:30:09 PST
Description:
This rare mobile launch pad has the card and the blister package. They have split and I haven't reattached the two pieces. The are dusty but I didn't want to wash too hard. the Mobile launch pad itself is a perfect 10 out of 10. You can clean up as you see fit, as this is not my specialty. The toy is NEW NOS original, never out of the blister pack until it detached. I find no others on Ebay to compare with. Bid with great confidence as the toy is NEW and PERFECT!!! By Mattel 1968. Mattel's Man In Space. This launch pad had at least 3 different uses, 1) Satellite Launcher 2) Space Probe 3) Rocket Launcher. Used to tow 3 mobile missile systems. 7 days no reserve. Major Matt Mason Mobile Launch Pad with Blister Pack and card. Call with any questions
My Take:
First, understand that this is an extremely rare toy, apparently only offered in Sears stores in 1968 and 1969 (same time as the Astro Trac Missle Convoy Set) - it may also have been offered at Simpsons Sears in Canada during that time but this is unconfirmed. One carded example that I own has a sears price sticker for $1.99 - I've yet to see any other carded examples with a different price sticker (from another store) so it's difficult to say if it was offered elsewhere. Due to the over-sized card and weight of the MLP, carded examples are usually found with the bubble separated from the card (as is this example). Loose examples where going for $150-175 just a couple of years ago, but they have come down to a more reasonable $50-75. The best carded example I've seen (near mint) sold for more than $1500 (I don't remember the exact amount), owned locally by Alec Peters. Selling for less than $200, I consider this a good price, even with the bent up card - my initial thought would be that it would go for more in the $300-400 range.
-- John
Posted by John Eaton at 3:05 PM 1 comment: