There were a couple of interesting auctions on eBay last week - the first was a little known men's magazine that featured MMM in a pictorial (much like the rare Diary Queen poster that used an uncredited MMM figure); and a scarce, Italian Baravelli catalog: 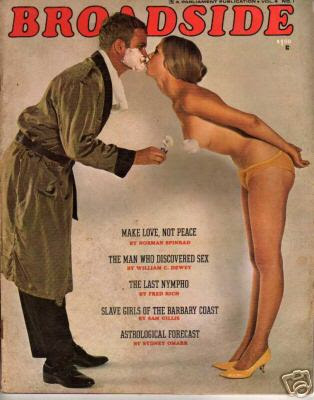 Vintage 1968 Mens magazine BROADSIDE Mattel MATT MASON
eBay Auction #200186734491
Ending Bid: $38.00
End Date: Jan-04-08 13:30:00 PST
Description:
You are bidding on a Vintage BROADSIDE Men's Magazine Vol 4 Number 1, dated 1968. The magazine has minor wear, but overall is in Very Fine condition. Features B/W pictorials with Color centerfold, Mattel Major Matt Mason action figure is used in a pictorial, astrology guide included, lots of toons good for a chuckle and several mens humor and fiction short stories. Would make a great addition to your collection.
My Take:
I'm not sure why this magazine went for so much money - typically these types of "B" men's magazines sell in the $10-30 range depending on content (articles by Ellison or cartoons by popular illustrators, or somethings pictorials featuring genre queens like Betty Page seem to go for the most). I certainly wanted this magazine but wasn't willing to go higher than my max bid of $37 (got outbid). 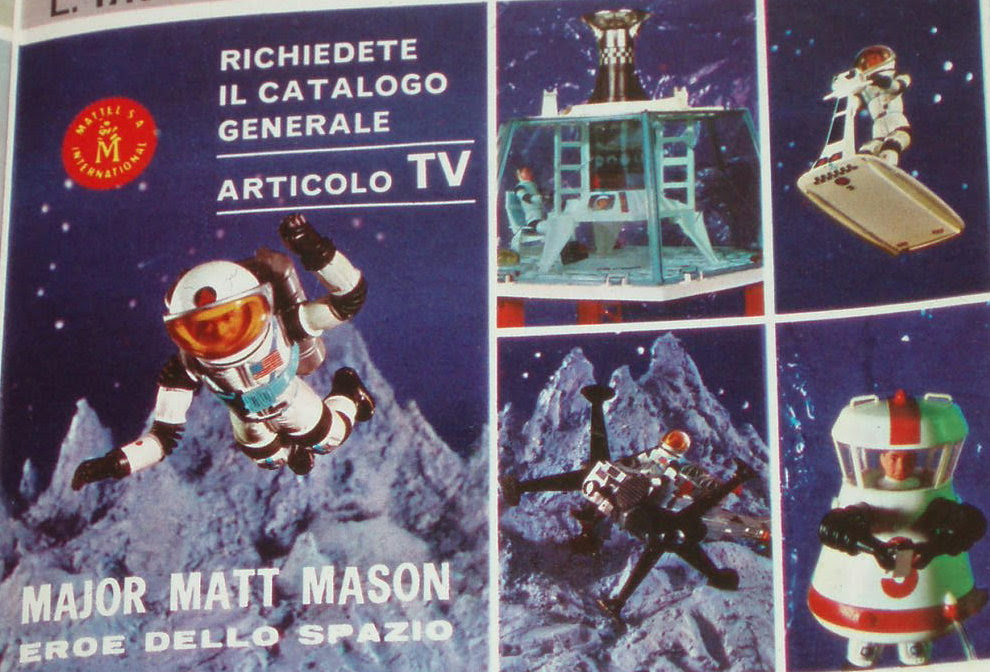 Baravelli Catalog Matt Mason Topo Gigio GI JOE Bonanza
eBay Auction #120201797534
Ending Bid: $90.00
End Date: Dec-30-07 10:56:48 PST
Description:
Baravelli Italian catalogue sheet with many illustrated pages probably from the late Sixties. Baravelli distributed many kinds of internationl toys in Italy. On the folder are for example pictures of : Major Matt Mason, Bonanza, GI JOE, American Hereos, Captain Action, Double Agent (Mike Hazard), Jane Blonde, Batman, Matchbox, Protar, Topo Gigio, Gama, Space Toys, Tin Toys, Machine Guns. The folded sheet measures approximately 8 inch (20 cm) x 4 1/2 inch (11 1/2 cm) and has some store wear, wrinkle and minor stain. Please see pictures. Registered airmail shipping cost is $ 9. This item will be sent in a bubble wrap envelope. At the moment all mail is very slow. I accept following payment methods : Paypal / Bank Money Order or Cashier's check (No Personal check) / Postal Money Order and Bank Transfer only in Europe /
My Take:
I own one of these - I think I paid less than $30 for it with shipping. I was first made aware of it by Paul Vreede who owns a copy (there are images in the International section of my MMM site). Baravelli was an Italian toy distributer who would buy toys from multiple manufacturers and market them in the Italian stores - that explains the mix of toys in the catalog. Often the packaging was from the UK, and later Germany as Mattel expanded production into those countries. I think the winning price here is rather excessive, however it's been a while since one has appeared so this may actually reflect the catalog's relative obscurity. It's an accordian-like fold-out and unbound. 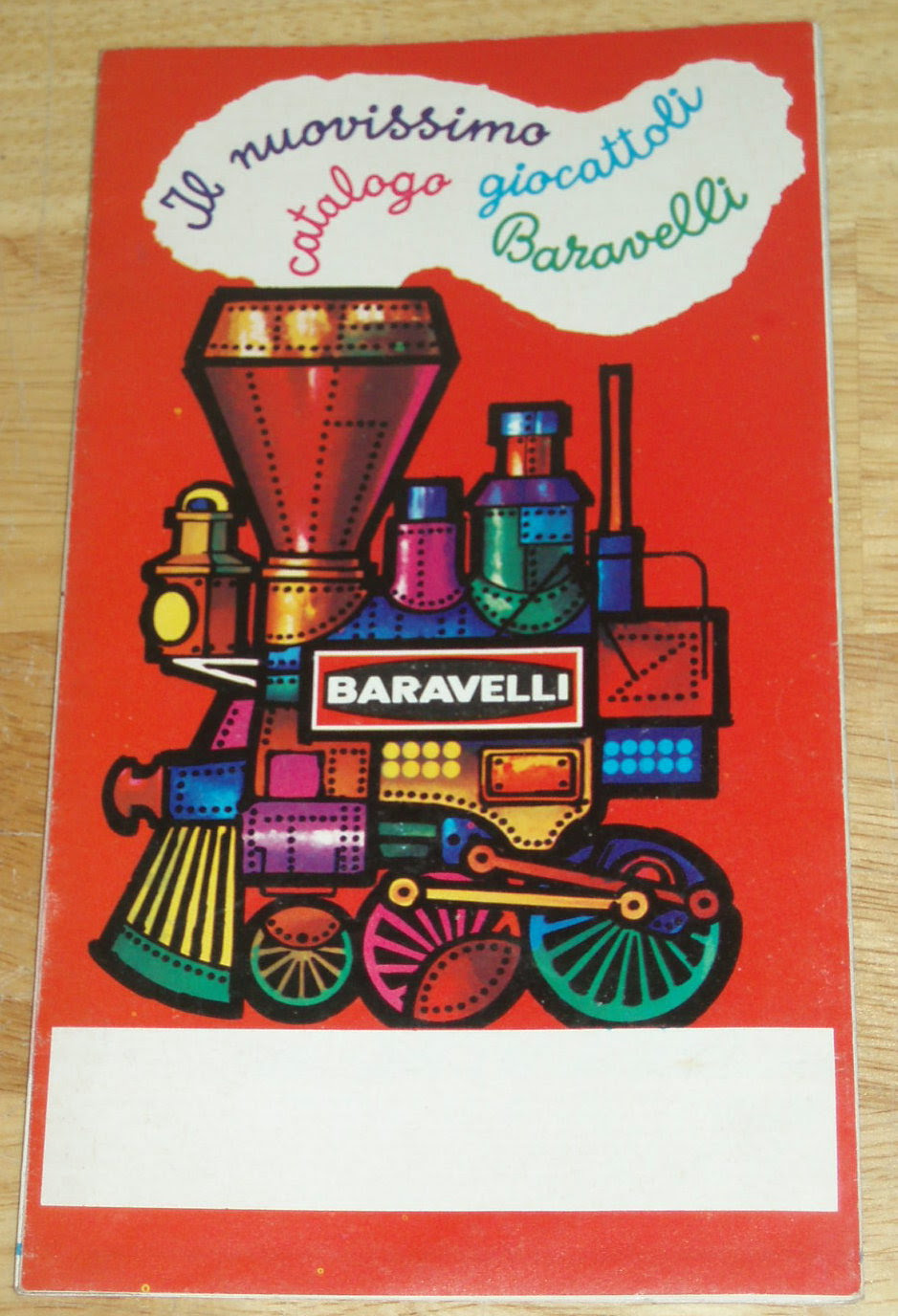 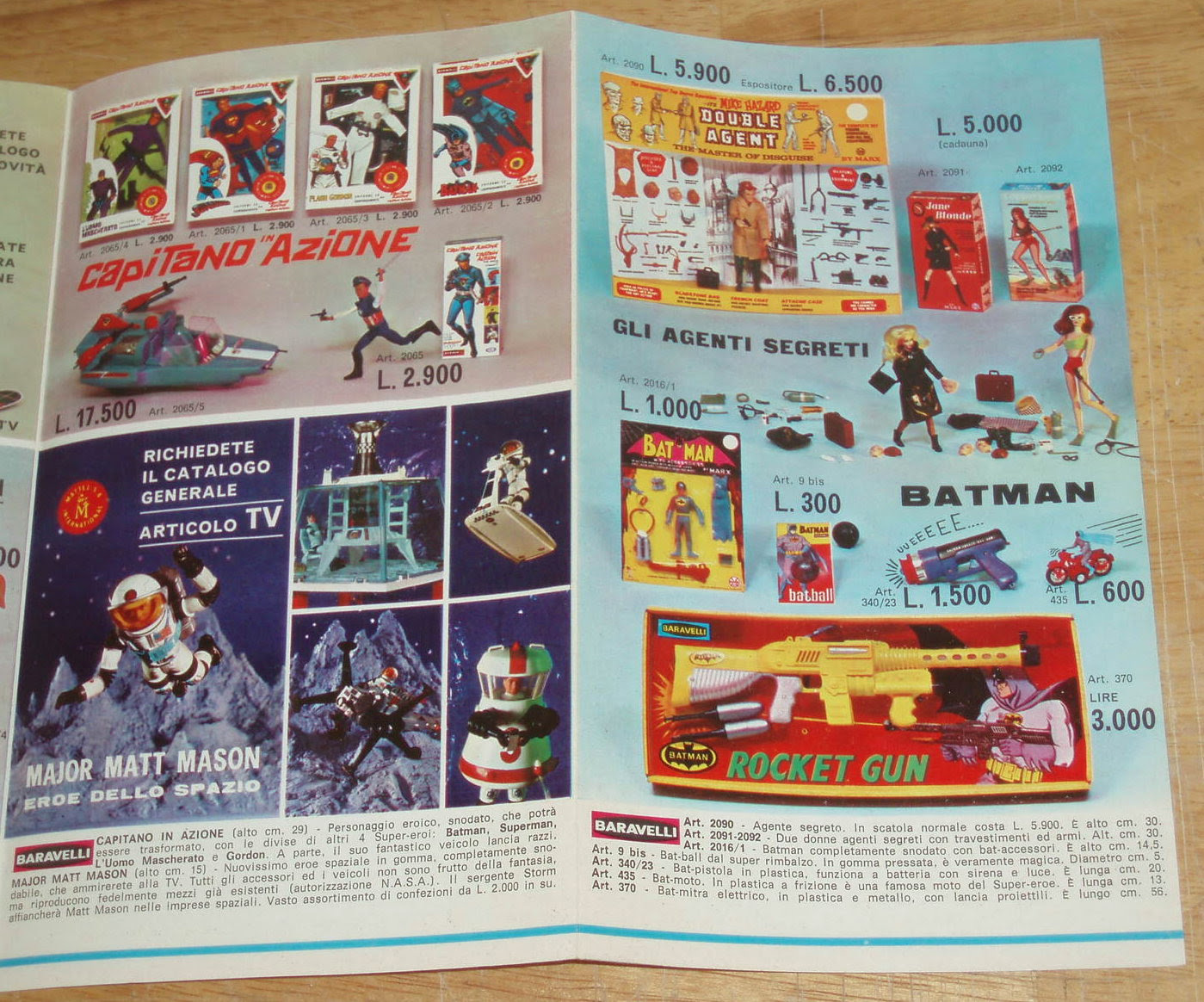 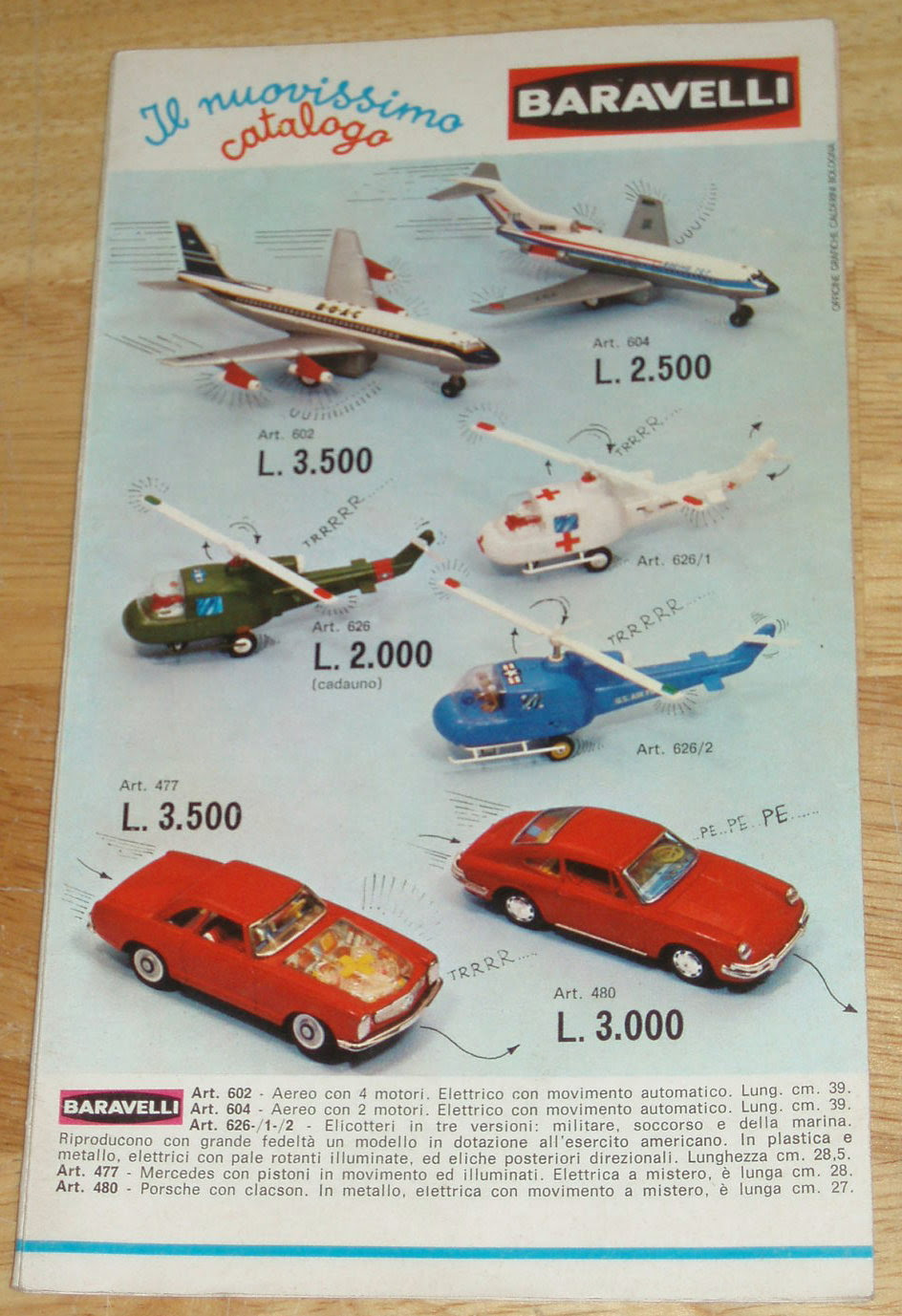 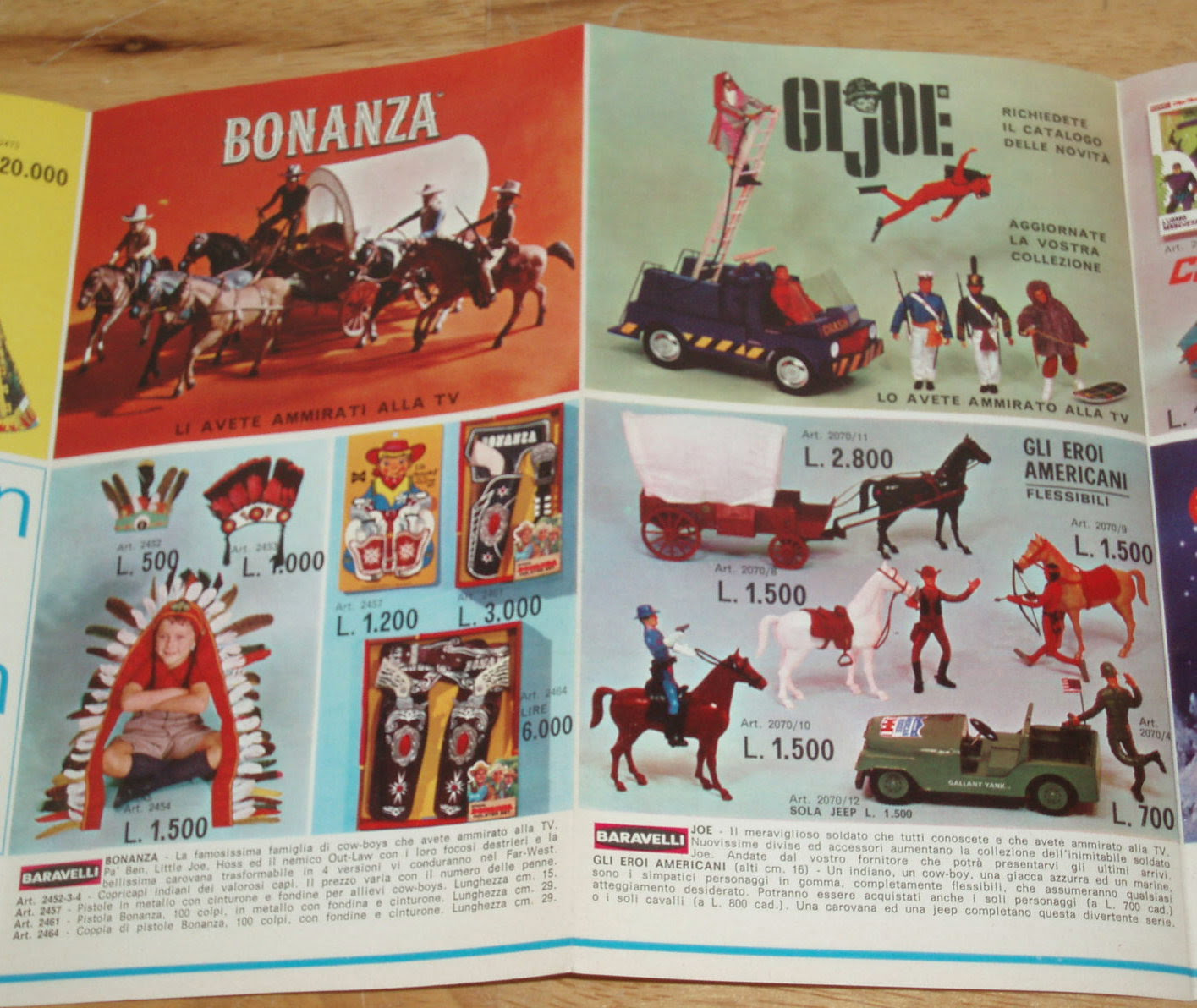 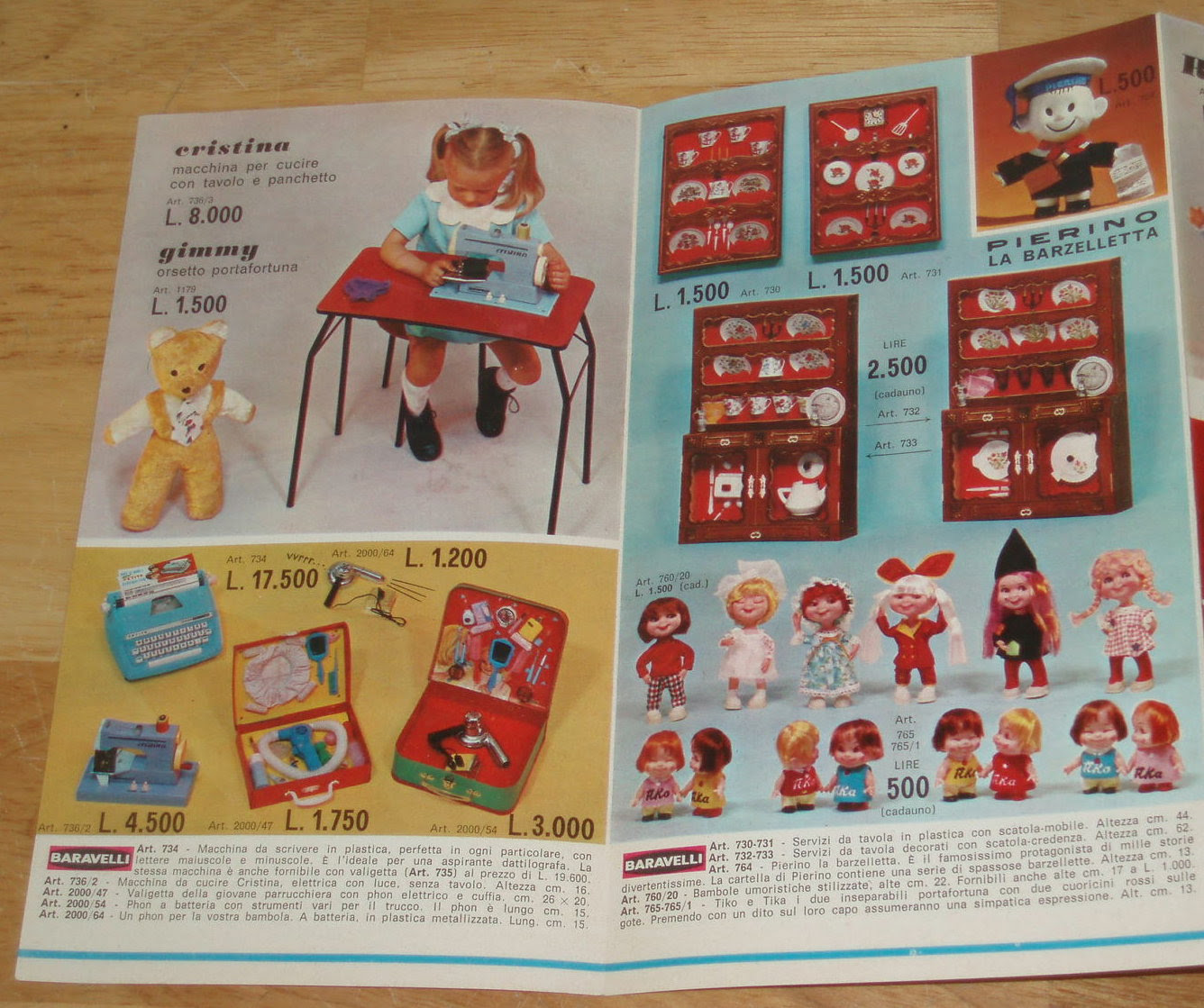 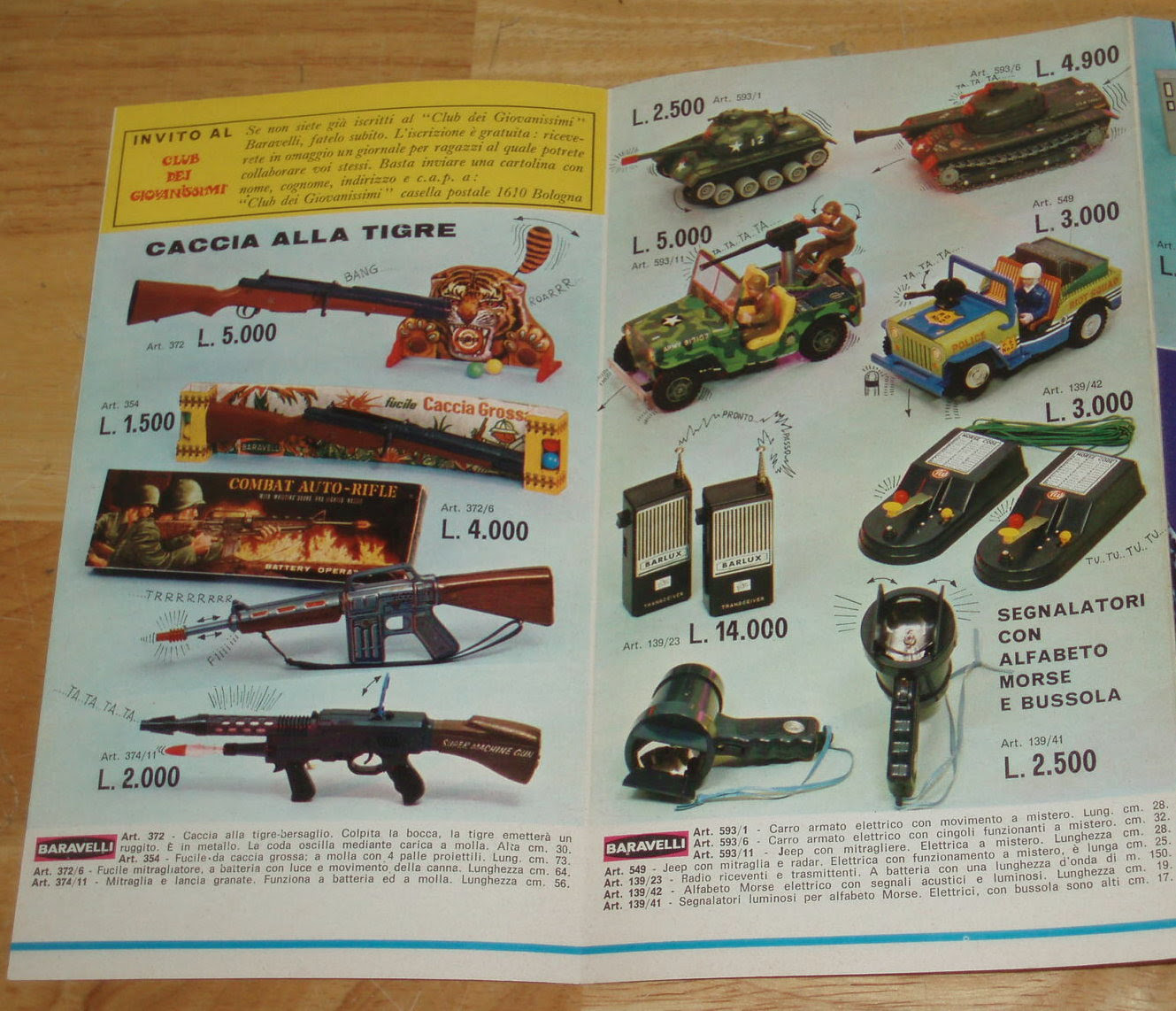 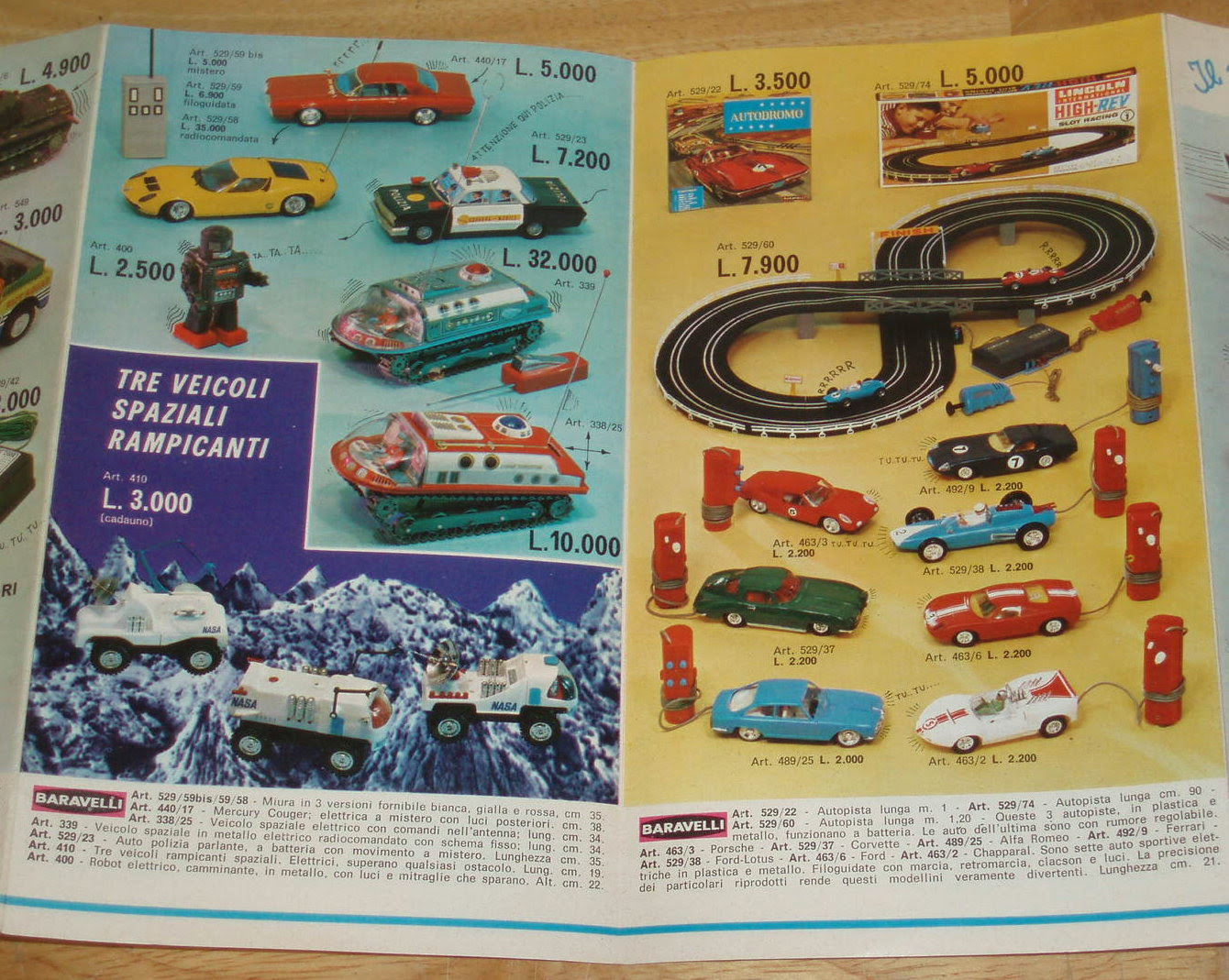 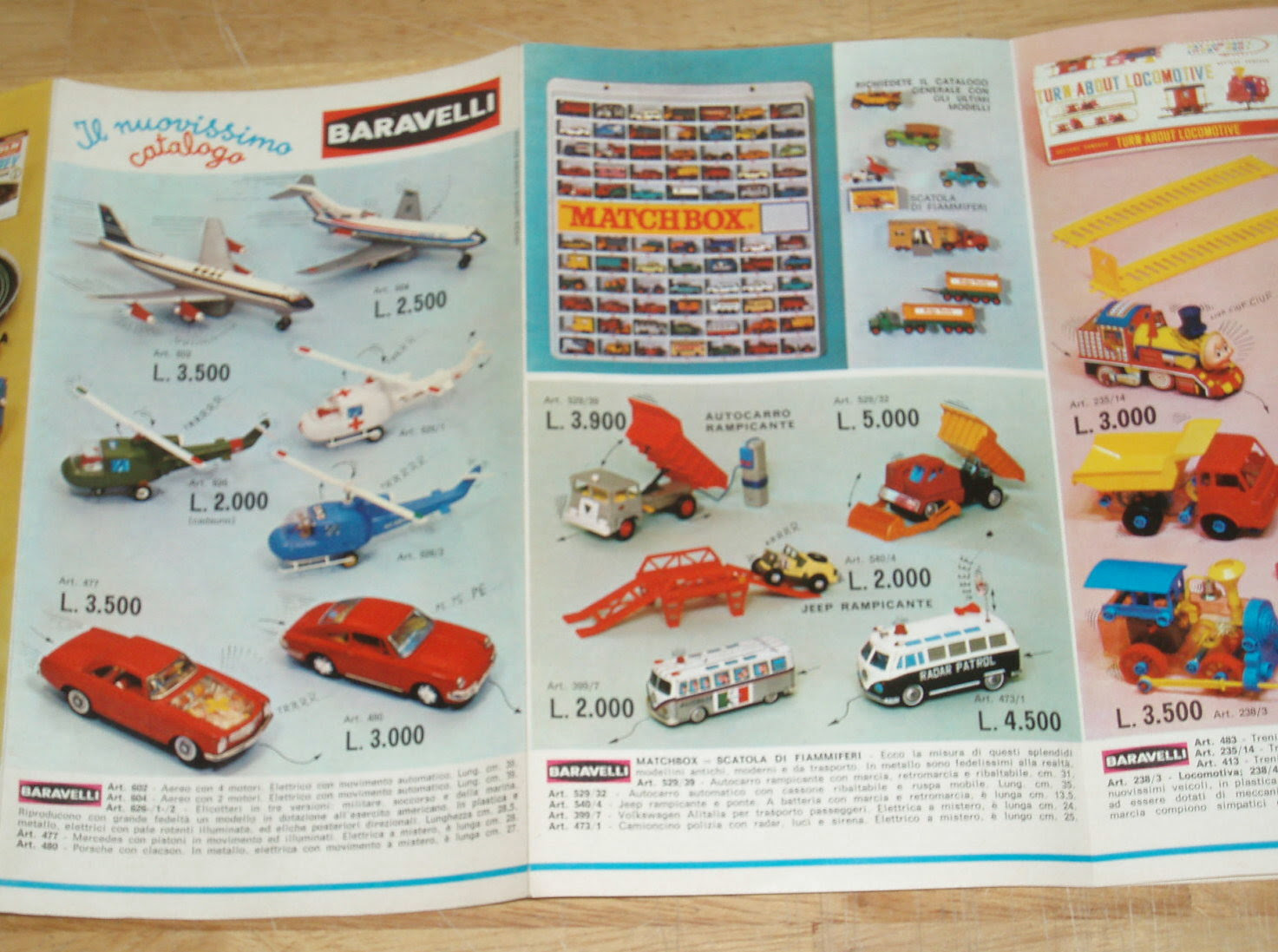 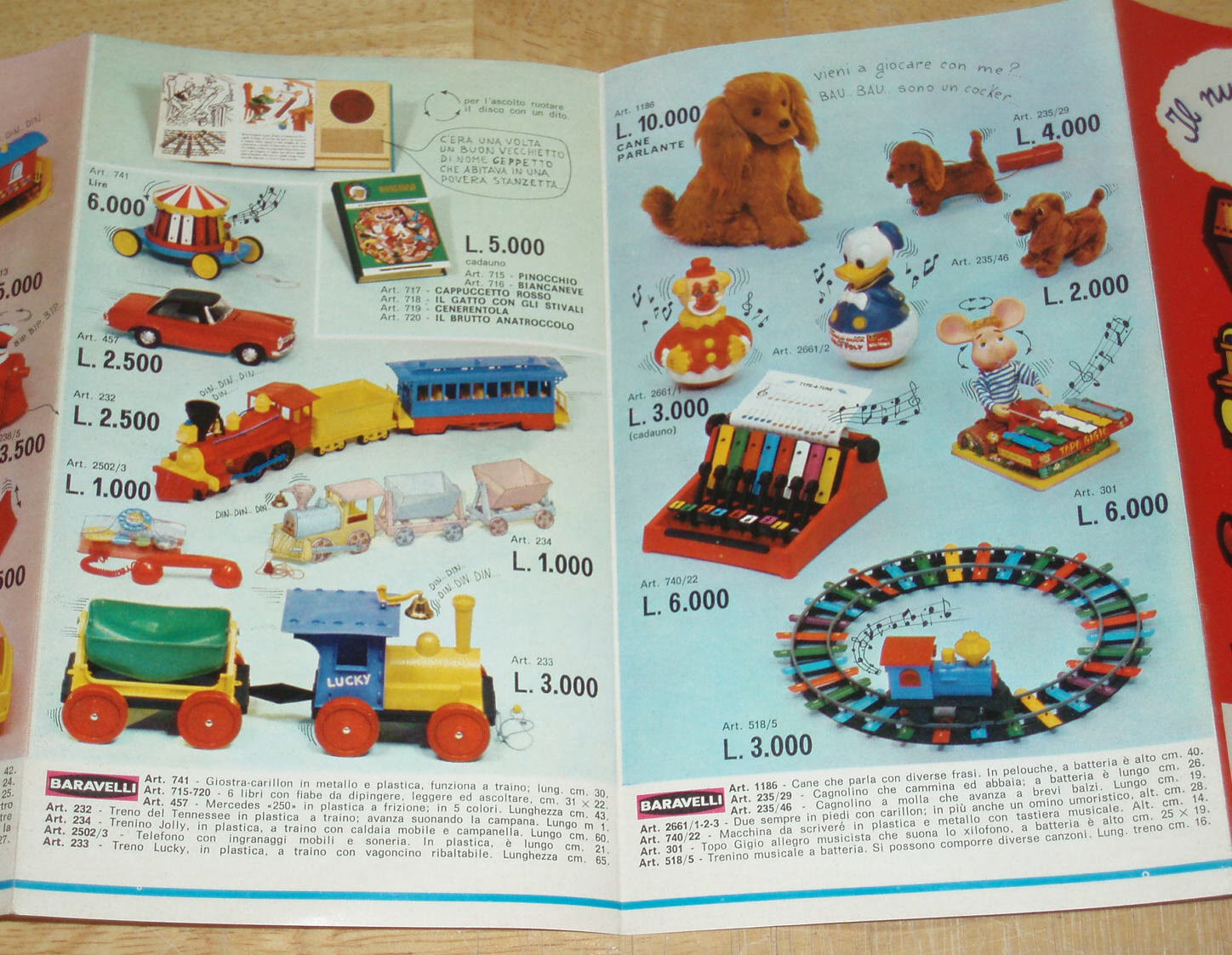 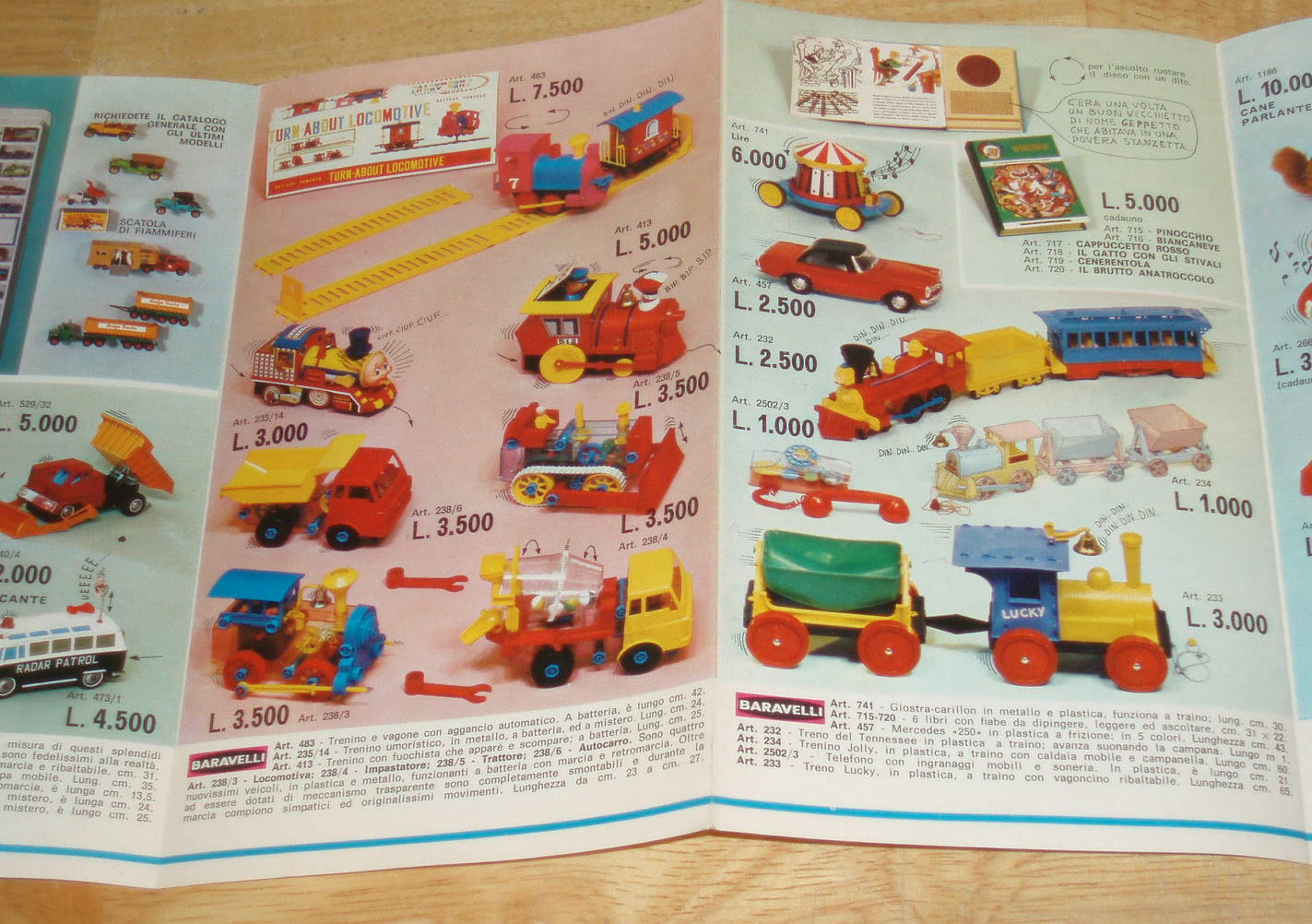